After my father’s death I shifted my mother and my wife to Kolkata from Deoghar.    The accommodation I was allotted at Kolkata was tiny, but it was rather well situated in New Alipore.   I was then an instructor with 12(Bengal) Air Squadron NCC with my office in Jadavpore University Campus.   For flying with my cadets I had to go Bengal Flying Club which was then located in Barrackpore.    For those readers of mine who are unfamiliar with the geography of Kolkata, Jadavpore is a suburb in the south of Kolkata while Barrackpore is a township quite a way north of the city.   Between the office and the flying club I was kept quite busy.

The flying club at that stage was a bit light in its aircraft assets.   Two Tigermoths monopolized by the NCC cadets over the weekend and one L-5 being flown by regular members was all that it had for regular flying.   It was a bit difficult for me to do a bit of flying for myself because of this shortage of aircraft.   Then the club acquired a brand new Pushpak from HAL.   For some time after its arrival no one could fly the Pushpak because no one had endorsement for the type on their licence.   I then sweet-talked the club authorities into letting me fly it.   After all, I had no civil flying licence but was authorised to fly training aircraft of the club because of my position as an NCC instructor.   The Pushpak was owned by the club, ergo, it was OK for me to fly it!   The club bought my logic.   I flew the aircraft twice in quick succession as soon as the club said OK to my flying, but had to give it a break to let some more self-indulgence money gather in my pocket.    This was the situation when one day my eldest niece asked me for a joy ride in an aircraft.   She was then a little over nine years old.

The little girl’s request set off a chain of thought in my mind.   Like most middle class families of my time, none of my immediate family members had ever had a chance to fly in an aircraft.   Now that I had an access to a light aircraft at a reasonable cost of only twenty-five rupees per hour, why should I not allow my family members to taste a bit of flying?   The idea seemed good and grew in my mind.   A couple of weeks later, when I was comfortable for a little indulgence again, I asked my sister whether she was keen for a joy ride in the sky.     She grabbed the offer without a moment’s hesitation.   We set up a program for the next weekend.

On the nominated Sunday I had the Pushpak to myself.   No one from the club had been cleared to fly the type as yet; the aircraft was just waiting to be flown by me.   My sister Chitra joined me at Barrackpore with her husband and two kids.    For their joy rides, I planned out a simple double circuit flight plan. 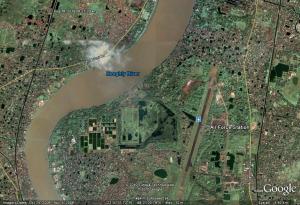 It was a simple flight plan and for a person flying for the first time it was reasonably long.    I took the four visitors up one by one and I was through the demo in about an hour.   My sister had brought a hamper of snacks and we enjoyed an after-flight picnic on the club grounds.

The news of this indulgence of the eldest sister spread like wild-fire through the family and I was inundated by queries as to who will be on the next trip and when.   The second Sister Hashi naturally claimed the second slot.   On the very next Sunday she arrived at Barrackpore with her husband, two children and three young sisters in law.    Being a lazy guy that I am, I did not try to make out a new flight plan.   The previous one had worked out well.   I decided to repeat it.

Unlike the previous day of joy rides, this day was some-what cloudy; visibility was not very great.    Low level clouding was minimal.   The main clouding was at 6 to 8 thousand feet; broken cumuli of four or five Octa ( that is 4/8th to  5/8th portion of the sky) with a suggestion  of some high level cirrus.    From about a thousand feet over the ground the land below looked patchy with some sunshine breaking through the clouds.   Bird activity was quite high.   With the cumulus clouds floating around, large kites and vultures were enjoying themselves soaring and circling the local area quite extensively.   Fortunately, they were perched generally well above the 1000 feet level that I was using.   For the sake of interest of my passengers, I quickly added on a natter about the soaring birds in lieu of the natter about the railway bridge crossing the river as that bridge was not clearly visible on this day.

Every thing was fine for the first three hops of mine.   My brother-in-law and two of his young sister/cousin had their joy rides and were highly thrilled.   The circuit was clear and I was the only aircraft airborne at that time.   To impress my brother-in-law, I added on a steep turn of 360 degrees on top of the air traffic control during my fly by over the runway on the first circuit.    He was duly impressed.

After this it was the turn of the third sister-in-law of my sister, a young girl of about 12 years named Shipra.   She was highly excited about her trip and I had to extend my chatter to keep her focussed on the trip.    During my first circuit with Shipra, I spotted a pair of Shankha Cheel

enjoying themselves about three or four hundred feet above me to my left.   I pointed out the birds to Shipra and she was thrilled to see the majestic birds with their wings extended.   (For those of you who wish to see a Shankha Cheel in flight, you can click and peek at http://www.flickr.com/photos/8081658@N07/3069975989/)

We stuck to our height and speed.   The big birds kept on soaring and did not pay any attention to us.   The horizontal visibility was not very great.   Shipra was totally unable to spot the bridge across the river.   We stuck to the flight plan.    At the end of the high level circuit I turned down wind again.   The pair of kites had by now drifted closer to the runway.   As I settled on the down wind leg parallel to the runway I found them to be directly in front of me.   They were however clearly above me by at least two hundred feet.   Shipra had been unable to spot the bridge over the river the first time around.   I therefore did not waste my time trying to get her to see it now.  Istead, I pattered her about how the large birds soared with updrafts and how they can fly for a long time without flapping their wings.   The kites by this time performed a lazy 360 left and came in front of the aircraft facing away from us.   We were by now about 100 mtrs behind them.   I saw the bird on the left look back and spot us.   She perhaps made a comment about us to her mate.   The other bird now turned his neck and looked at us.   By now we were very close to the birds but about 200 feet below their level.   I just do not know what got into this bird’s head; he just folded his wings and dived straight at us!

There was nothing that I could do at that moment.   As the bird came close to the aircraft it spread its wings out, perhaps in a last-minute attempt to climb out of my path.   He was horribly late in his desperate attempt.    He hit the top of the propeller disc.   Half of one of the two blades of the propeller broke off and went tumbling into the river.   Blood flesh and feathers splattered over my wind shield.   Fortunately, bulk of the body mass of the bird got thrown out sideways and did not hit the aircraft body (which was made of plywood and fabric!) and did not cause any structural damage.

With half a blade missing, the engine went into a severe vibration.   For a moment I was afraid that the engine mounting will give way and the engine will fall off the aircraft.   I pulled the throttle back and switched the ignition switch off.   The engine stopped.  There was absolute quiet except for a whistle of the air past the door of the aircraft.

I had instinctively turned right towards the runway.   By my estimation, from one thousand feet on the down wind it would have been possible to reach the runway with the engine shut off.   Fortunately for me, I found that there was a fair amount of cross wind from the west that was pushing me to the runway.   I therefore had no worries about reaching the runway or thereabouts safely.   I however had not practiced steep descending turns with the engine off and was unsure of the height loss under such circumstances.   I therefore kept the turns shallow and reached near the runway with a little more than fifty feet to spare.

I should now have been able to heave a sigh of relief, but a new drama  unfolded itself.   A trainee pilot of the club in the L-5 decided to enter the runway at this very moment for a take off.    Like the Pushpak, the L-5 too was not fitted with a radio set.   The trainee pilot was obviously unaware that an aircraft in an extreme emergency was about to land on the active runway.    In a display of inadequate airmanship, he had also failed to physically check the approach path before entering the runway.    I had to make up my mind quickly.   I was in the process of rounding off for landing.   I knew that I would not be able to stop the aircraft before I reach the point now occupied by the L-5.   I could not manoeuvre my aircraft at this critical stage.  I therefore decided to land and then go off the runway to the right if need be to avoid the other aircraft.    The Air Traffic Control fired a red flare at the L-5.   One technician from the flight line ran to the L-5   gesticulating wildly with his hands.   The L-5 pilot saw me as I was touching down behind him.   With a burst of throttle he rolled forward and cleared the runway on to the grass shoulders to the left.    I was able to roll straight and stop the aircraft almost exactly at the spot where the L-5 had been standing.    Few technicians came running to my aircraft and pushed it off the runway to the club flight line.

Poor Shipra was sitting quite dazed in the aircraft for all this time.    She had not realized what had happened and how close we had come to real danger.    My guests came to the aircraft as we emerged from it.   The morning ended with real high drama for them.

I had to hang around in Barrackpore for the next three or four hours till a representative of DGCA could come down and inspect the aircraft.   I got a round of appreciation from the club authorities and the DGCA rep for getting the aircraft back in one piece after the bird strike.

The aircraft sat on te ground for a long time after this incident for the lack of a propeller.( Prompt resupply of spares had never been a strong point of HAL!).    I went off on a long attachment to Hakimpet by the end of April and got posted out of my NCC unit by September.   I never flew this (or any other) Pushpak again!